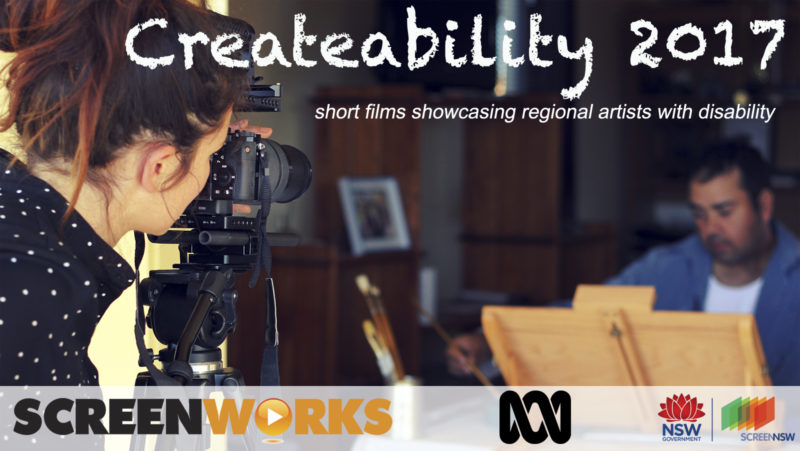 Now in its third year, Screenworks’ initiative Createability 2017 will this year increase its total funding to $40,000 to support regional filmmakers in NSW to produce eight short films.

Thanks to increased support from Screen NSW and the ABC, Createability 2017 will increase the project’s footprint by inviting applications from filmmakers across all of regional NSW (which excludes Sydney, the Blue Mountains and the Central Coast).

Screenworks has also increased its Createability funding so that each of the eight filmmakers will receive $5,000 to be used to showcase their chosen regional NSW artist in a short film.

Since its inception three years ago, Screenworks has used the Createability project to help to increase the diversity of Australian stories on our screens. It has achieved this by investing directly into regional screen production, uncovering engaging regional stories and partnering with the ABC to bring these stories to our screens.

In December 2016, the ABC launched the Createability collection on ABC iview to mark the International Day of People with Disability and the ABC have also broadcast several of the films domestically and internationally.

Screenworks’ General Manager, Ken Crouch launched the Createability 2017 program today – “Createability is a project that we are very proud of and it’s extremely gratifying to be able to build upon the project’s achievements of the past two years” said Mr Crouch. “In 2017 we’re looking forward to regional filmmakers unearthing more compelling stories of regional artists that complement the twelve films that have already been produced”.

Successful applicants will be supported throughout the program by local ABC Regional Producers who will offer feedback at each stage. Each of the films will be made available on ABC iview at the end of this year.

Fiona Reynolds, Director ABC Regional said “We are excited to be a part of the Createability project again in 2017. By partnering with Screenworks and Screen NSW, we can offer emerging filmmakers the opportunity to profile talented artists with disabilities who live in regional NSW. We can’t wait to see the diverse stories and talents that emerge from this project.”

“It is a priority for Screen NSW that we support opportunities and access to the screen industry for underrepresented groups in the community. Createability is a wonderful program that has given us compelling portraits of regional NSW artists, and we are excited about this project, which will give us eight more films, produced outside metropolitan centres, about a diverse group of artists” said Grainne Brunsdon, Director Engagement, Partnerships and Development at Screen NSW.

Applications are now open and Screenworks is asking filmmakers from regional NSW areas to apply. All applicants must attend the Createability Facebook Live Video stream ABC Pre-Production Masterclass and/or watch it post the event as this will assist them to complete their application. During the Masterclass, they will gain professional advice to assist them in producing a competitive storyline and outline budget to the standard required by the independent panel. The ABC Pre-Production Masterclass was streamed live via the ABC Open Facebook page on Tuesday 28th March 2017, 8pm – 9pm EDST. This video is now available to view here.

Applications will close at midnight on Sunday 23rd April 2017 ESDT. Final decisions on all successful filmmaking funding applicants will be made by an independent selection panel. Detailed information about the Createability 2017 application process and the project are available from Screenworks’ Createability 2017 website at Screenworks.com.au/createability.

Createability is providing local funded opportunities for professional filmmakers to profile artists with disability living and creating in regional NSW. By producing these short films, Screenworks wants to provide artists with disability the opportunity to challenge community attitudes and misconceptions that form barriers to social inclusion, while also providing the funds and opportunities for regional NSW professional screen workers to produce short films.

Screenworks Diversity Commitment: Screenworks are strongly committed to increasing diversity across all sectors of the screen industry.  We encourage all talented filmmakers to apply to our programs regardless of their gender, race, religion, sexual orientation or disability status.

We also ask that applicants consider inclusiveness, accessibility and diversity when forming their filmmaking teams for any Screenworks initiative.

For video content for this release, please go to: http://iview.abc.net.au/collection/createability

Artist Zion Levy Stewart in his Mullumbimby studio in the Northern Rivers during filming for Createability 2016 film ‘The Fine Art of Being Zion’ (Dir. Susie Forster, Ocean Shores, NSW)