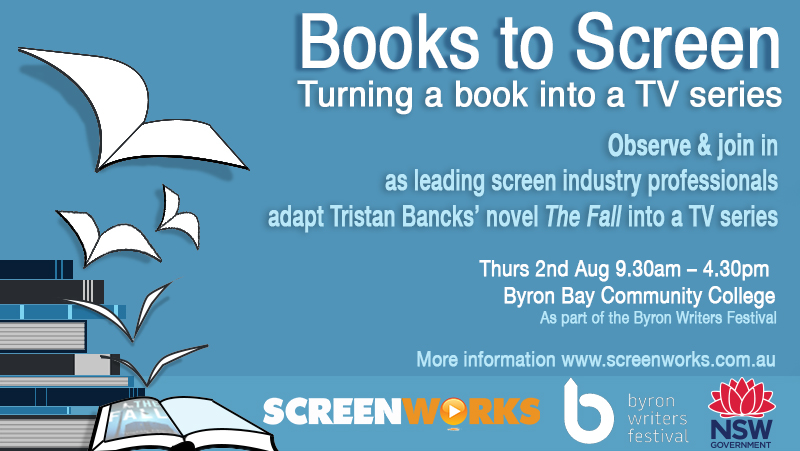 Turning a Book into A TV Series

A workshop at the 2018 Byron Writers Festival

Find out what really happens to a book as it goes through the process of being adapted into a TV series.

In this unique behind-the-scenes opportunity, participants can observe the workings of a professional Writers Room and contribute to the development of the TV series.

In the workshop, the creative team will break down the novel to identify the story engine for the TV series, establish the key characters and plot the story arc.

The audience may contribute by working out solutions to plotting problems and presenting their ideas to the creative team.

The workshop will be facilitated by author and screenwriter Jesse Blackadder who will explain the process, question the creative team and invite the audience to participate.

In this capacity he develops, writes and produces television dramas for local and international markets.  Timothy’s credits include, amongst others; Killing Time, Better Man, Wentworth and Wanted.

Belinda Chayko is an award-winning writer and director of premium content across film and television.

She most recently was showrunner/lead writer on the asylum seeker thriller Safe Harbour (SBS), nominated for five Logie awards. Other writing credits include the PTSD event mini-series Fighting Season (Foxtel), Secret City (Foxtel) – a political thriller starring Anna Torv (Fringe) and Oscar nominee Jacki Weaver (Silver Linings Playbook) – and Barracuda (ABC), an adaptation of Christos Tsolkias’ novel, which was nominated for an AACTA Award for Best Miniseries and for which Belinda won an AWGIE Award.

Both Safe Harbour and Barracuda have screened at the Festival International de Programmes Audiovisuels (FIPA).

Erin is a screenwriter, editor and development executive, based in Melbourne. Most recently she was a writer and script editor on the award-winning series Nowhere Boys for Matchbox Pictures and the ABC.

She got her start in the industry coordinating the Fiction Development programs at Film Victoria, where she was across scripted projects for film, television and online as well as skills development for writers. Erin then went on to a role with Blackfella Films as the Development Executive for their drama slate, working on feature films as well as television projects commissioned by the ABC and SBS.

She has worked in story rooms with Matchbox Pictures, Blackfella Films and Carver Films and has written coverage for a number of Australian production companies. She has also been a judge for the CineStory Foundation TV and Digital Fellowship since 2016.

Erin is actively engaged in the emerging sector and always keen to help develop new voices. She is the Program Coordinator for Plot Twist, an initiative funded by Film Victoria, to deliver a series of skills development labs for early-career writers working with episodic, games and VR narratives.

Tristan Bancks is a children’s and teen author with a background in acting and filmmaking. His books include Two Wolves (recognised as an Honour Book in the 2015 Children’s Book Council of Australia Book of the Year Awards, as well as winner of the YABBA and KOALA Children’s Choice Awards), the My Life series (weird-funny-gross short stories featuring Tom Weekly) and Mac Slater, Coolhunter.

His short films as writer and director have won a number of awards and have screened widely in festivals and on TV. Tristan is excited by the future of storytelling and inspiring others to create.

Dr Jesse Blackadder is an international award-winning author of fiction and has been on Byron Writers Festival board since 2011.

A winner of literary awards in the USA and Australia, she is the author of three adult novels and three children’s novels. Jesse won the 2011-12 Australian Antarctic Arts Fellowship, and has been a writer-in-residence in Antarctica, Alaska and outback Australia. She has a Doctor of Creative Arts and teaches creative writing.

Jesse has been a peer assessor for the Australia Council, a judge for The Australian Society of Authors Mentorship Program and the Nature Conservancy Nature Writing Prize, and is an author ambassador for Room to Read, the non-profit organisation for improving literacy and gender equality in education in the developing world. For Byron Writers Festival, she’s taken a lead role in developing StoryBoard (creative writing in local schools) and Books To Screen.

Books to Screen is being delivered in partnership with Byron Writers Festival.

Screenworks is supported by Screen NSW through its Industry Development Fund.

Please support Screenworks by using the links below.