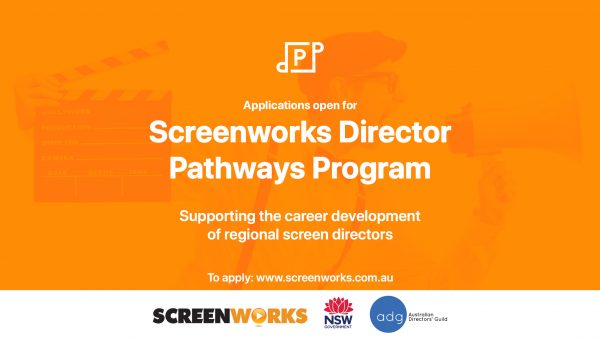 A Progress Report from Alison Plasto on her Director Pathways experience.

I first heard of Screenworks when the call for applicants for The Athena Project went out across Australia in late 2016. A shooting director in factual, my sights were firmly reset on drama.
There’s no easy pathway to directing series drama in Australia but with Screenworks and Create NSW’s support, I am finding my feet. In 2017, I assistant directed and completed a Director’s Attachment on the feature The Merger with Mark Grentell. The experience of setting and filming a story regionally was invaluable and led to shadowing on Wentworth with Fiona Banks in 2018.
In 2019, along with Clare Sladden, I was selected for the Screenworks Director Pathways program which is offered in partnership with the Australian Directors Guild. What a difference it has made this year.  They helped line up Kevin Carlin as a mentor, who I am shadowing on SeaChange.
Mentoring Advice: When you’re ready for a mentor, choose someone who is educational as well as visionary. That way, even on the most difficult of days, you’ll keep learning and can laugh about it later!
There are no guarantees in the screen industry and to progress (and survive!) you need another string to your bow. For me, it’s shooting and producing in factual and media. The writers, producers and directors I have met through Screenworks have nurtured the ups and downs of this industry. I make every effort to keep these connections alive so we hear these important regional voices.
There’s still a long way to go to directing series drama full-time but I’m on the way thanks to Screenworks. My goal this year is to direct a full episode of multicam television via the ADG’s drama placement program. With the dual focus of developing our own series and directing television drama together with the team and members at Screenworks, I know I’ll get there.
The latest Directing opportunity from Screenworks is the 2-day Directing Intensive with Kriv Stenders August 24& 25th in Byron Bay…more
You can explore Alison’s work at
http://outofline.com.au/alisonplasto/ and
https://www.freethebid.com/directors/alison-plasto/

A Shooting Director based on the NSW and Victorian border, Alison is passionate about giving rural and regional Australians a voice, especially those who have lost their voice. Last year Alison completed a Director’s attachment on the feature The Merger and this year shadowed on the Wentworth TV series.
Alison is currently developing a drama series with co-creators Georgina Jenkins and Sue McPherson and will use the Director Pathways opportunity to direct her first TV drama episode through the ADG’s TV Drama Shadow Directing Program. When she’s not behind a camera, you’ll find Alison in the mountains … usually with some skis on. Pride Out West is Alison’s fifth broadcast film.

Clare is an award winning writer/director with a passion for thematically resonant, female-driven stories. Her first feature-length screenplay, Always the Dressmaker, was a finalist in the prestigious Cinestory Fellowship in 2014, and since then she’s won and placed in various international screenwriting competitions, and her short films have won awards, and screened at Academy-accredited film festivals.

Clare’s screenplay, Broken Head, won the inaugural Byron Bay Film Festival International Screenplay Competition, was a semifinalist in the 2017 Academy Nicholl Fellowship; her debut short film, Consent, which she wrote, directed & produced, has screened nationally and internationally; and most recently, Clare was nominated for an AWGIE for her writing on Freudian Slip, her web series which has over 50K+ views, which she wrote, directed & produced.

Screenworks Director Pathways Program is a professional development program, delivered in partnership with the Australian Directors Guild (ADG) and with the support of Create NSW. The program provides bespoke career development opportunities to two emerging and early-career directors living in regional NSW.

The program is open to directors of all genres, including (but not limited to) TV drama, documentary and children’s television. This program would best suit early-career directors who are genuinely committed to building their skills as a professional director and need support and opportunities to further their career. Through this program, as participants enhance their directing skills they contribute to the growth of the screen industry in regional NSW.

As part of the application process, applicants are required to submit a draft career plan with proposed activities to the value of $3,500 (excluding GST). Career plans may be made up of any combination of the following (or other relevant career enhancement opportunities):

Screenworks, the Australian Directors Guild and a panel of professional screen directors will be involved in the assessment process to select the two early-career directors to take part in the project.

Once the two directors have been selected, Create NSW, Screenworks, the Australian Directors Guild and a professional director will review, refine and approve the selected participants’ career plan.

To be eligible for Screenworks Director Pathways Program you must meet ALL of the following criteria:

5. A letter of support from a screen industry professional who has known you for more than 12 months and/or is familiar with your work

6. Proof of your regional NSW residency

The following selection criteria will be considered when assessing applicants for participation in Screenworks Director Pathways Program (all criteria areas are equally weighted):

Screenworks is strongly committed to ensuring equal access to this project – if you require assistance with your application, please contact Screenworks on: Telephone: (02) 6681 1188.

The assessment panel will consider how well the eligible applicants meet the selection criteria (see above).

Applicants will be notified by early December 2018 in writing of the outcome of their application.

A director may also be considered eligible if they have had recent success in projects currently in development that may meet one of the above criteria.

“Regional NSW” – Regional NSW includes the Central Coast, Hunter and Illawarra and is defined as the areas or regions outside of Sydney and Western Sydney. Please refer to this document for clarification.

Create NSW is the statutory authority established to assist, promote and strengthen the screen industry in NSW so as to promote Australia’s cultural identity, encourage employment in all aspects of screen production, encourage investment in the industry, enhance the industry’s export potential, encourage innovation and enhance quality in the industry.

The Australian Directors Guild (ADG) is a registered industry association representing the interests of film, television and digital media directors, documentary makers and animators throughout Australia.

ADG works to promote excellence in screen direction, to encourage communication and collaboration between directors and others in the industry and to provide professional support for its members.

ADG is proud to represent the key creative elements of the Australian independent production sector and maintains its high profile in a cultural and policy role by addressing issues affecting the industry from a broad perspective.