Breaking into the Screen and Media Industries 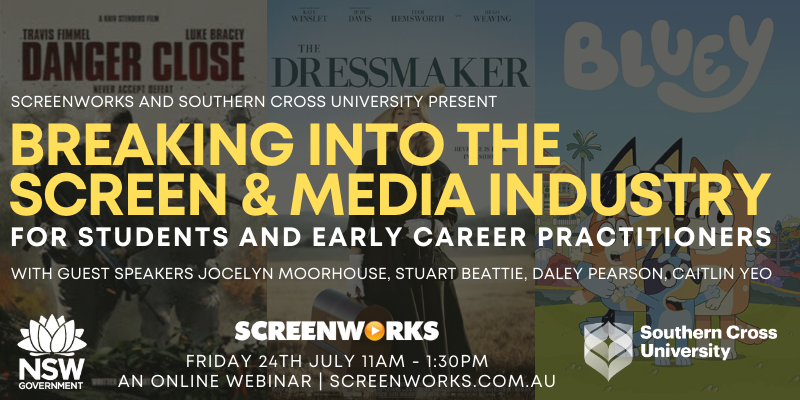 Some of Australia’s most accomplished film, television and music professionals will come together for this panel to talk about their career journeys, the work they do and to advise students and early-career practitioners on how to break into the screen, media and music industries.

The panel will be facilitated by Northern Rivers based producer and Screenworks founding member Lois Randall (Grace Beside Me) and there will be an opportunity for participants to ask questions of the guest speakers.

If you’re serious about a career in the screen, media and music industries, then you should come along and listen to these industry success stories. A must-attend opportunity for anyone who is interested in composing, screenwriting, film and television production and animation.

Caitlin is an acclaimed, multi-award winning screen composer. Her signature style emerges from a fascination with music from different cultures and 20th century form. Her compositions are alive with a deep love of telling stories with music.

Caitlin has recently composed the music for Kriv Stender’s latest feature Danger Close: The Battle of Long Tan and collaborated with Amanda Brown on the Slow TV documentary The Chocolate Factory for Mint Pictures/SBS TV. She is currently working on Sally Aitken’s feature documentary Valerie and the TV drama series Wakefield for Jungle Entertainment/ABC TV.

Caitlin’s score for Priscilla Cameron’s The Butterfly Tree was awarded ‘Feature Film Score of the Year’ and ‘Best Soundtrack Album’ at the 2018 APRA Screen Music Awards. Her work on Danger Close: The Battle of Long Tan won ‘Best Original Score’ at the 2019 FCCA Awards.

Caitlin has also scored multiple feature films, including critically acclaimed The Rocket, cult classic All My Friends are Leaving Brisbane and Standing Up for Sunny. Her documentary work is vast including, Foxtel series, The Pacific in the Wake of Captain Cook with Sam Neill,David Stratton: A Cinematic Life,  Bomb Harvest,For The Love of Meat, After The Apology,  and ABC TV series The House with Annabel Crabb.

Her composition credits also extend to the stage, including Seven Stories; an audio visual work performed by Ensemble Offspring, at the City Recital Hall for Vivid 2017, and the arena show Heartland:Australian Outback Spectacular, currently performing daily in the Gold Coast.

Caitlin Yeo has received a swathe of accolades including five APRA screen music awards; The Butterfly Tree in 2018 (Feature Score of the Year and Best soundtrack Album) ; Feature Score of the Year for The Rocket (2013), and Best Music for a documentary for Getting Frank Gehry (2016) and Bomb Harvest (2007),  4 x AACTA nominations,  a 2017 Ozflix Award for best music, and two Film Critics Circle awards. In 2011, Caitlin was also awarded the APRA Professional Development Award, which garnered her a spot at the prestigious ASCAP Film and TV Scoring Workshop in Los Angeles.

Stuart Beattie is an Australian director, screenwriter, and producer.

He began his career writing screenplays for Australian independent films, then branched into Hollywood with Pirates of the Caribbean: The Curse of the Black Pearl and the Tom Cruise thriller, Collateral.

Stuart finally got the chance to direct one of his own screenplays with the adaptation of the best-selling Australian book, Tomorrow When the War Began. Stuart’s follow-up film, which he wrote and directed, was I, Frankenstein, starring Aaron Eckhart, Bill Nighy, and Yvonne Strahovski.

Stuart’s latest film that he wrote and produced is the acclaimed Australian war drama Danger Close: The Battle of Long Tan.

He also wrote the original bible and pilot for Halo at Showtime.

And in theatre, Stuart wrote the book for Jim Steinman’s smash-hit musical, Bat out of Hell.

Daley Pearson is a multi Emmy® Award winning creator and co-founder and director at Ludo Studio. Pearson’s first half hour comedy series for ABC TV turned into the fastest format sale in Australian TV history with a remake piloted at NBC Universal. In 2019, Pearson Executive Produced the Logie, AACTA and Emmy award winning animated series, ‘Bluey’ for ABC and BBC Studios, the AACTA winning ‘Robbie Hood‘ for SBS TV and was showrunner for ‘The Strange Chores’ and ‘Content’ for ABC TV. ‘Bluey‘ is now the most watched show in the history of ABC iView with over three hundred and fifty million views. Sydney Morning Herald said, ‘Robbie Hood’ is the most perfect piece of TV you’ll see this year. ‘Content’ was named in Junkee’s ’40 shows that defined the decade’ and was the world’s first vertical video drama series commissioned for ABC TV. Recently, Pearson played Thor’s room-mate, Darryl with Chris Hemsworth and Jeff Goldblum in Taika Waititi’s ‘Team Thor‘ and ‘Team Darryl’ comedy series by Marvel Studios.

In 1994 Jocelyn moved to Los Angeles to direct How to make an American Quilt (1995) which starred Winona Ryder and Anne Bancroft and A Thousand Acres (1997) which starred Michele Pfeiffer, Jessica Lang and Colin Firth. She works closely with her husband PJ Hogan and was producer on his films Muriel’s Wedding, Unconditional Love, Peter Pan and Mental.

In 2012 she returned to Australia and directed her first stage play, Sex with Strangers by Laura Eason, at the Sydney Theatre Company under the artistic directorship of Cate Blanchett and Andrew Upton. In 2015 Jocelyn wrote and directed the feature film, The Dressmaker which starred Kate Winslet, Judy Davis and Liam Hemsworth and premiered at Toronto Film Festival. The film received 13 AACTA nominations winning in 4 categories as well as receiving the People’s Choice Award for Favourite Australian Film and going on to screen at many film festivals in Australia and internationally. In 2016 Jocelyn received the following awards: The Adrienne Fancey Best Film Award at The Women’s International Film & Television Showcase (WIFTS); Best Screenplay, AFCA Award and Audience Favourite, Silver Award, Mind the Gap Women, Mill Valley Film Festival. Her TV credits include Wanted (2018) for Channel 7/Netflix, Les Norton (2019), set up director for Roadshow Rough Diamond/ABC and Stateless (2019) for ABC produced by Tony Ayres and Cate Blanchett. In 2019 Jocelyn’s memoir, Unconditional Love, a memoir of filmmaking and motherhood, was published by Text Publishing.  She has feature films in development with Sue Maslin and Lucky Chap.

Lois Randall is an award-winning Screen Producer with a passion for distinctive narrative drama. She was Producer of the 8 episode series of Seachange, an ITV and Every Cloud co-production which premiered on the Nine Network as the highest rating TV drama for 2019. Through her production company Magpie Pictures she was Producer and EP of the Prix Jeunesse International UNESCO Prize, AACTA and LOGIE nominated 13 episode live-action children’s series Grace Beside Me, that screened on NITV, ABC and Disney Channel 2018/19, and which was awarded Children’s Series Production of the Year at the 2018 SPA Awards. She was also Producer of The Gods of Wheat Street, Miniseries of the Year, 2014 SPA Awards, and a Development EP on the 2018 AACTA Award-winning web series Deadlock, both Every Cloud Productions for ABC TV. Lois has also produced several acclaimed short films, was line-producer on the ABC series East of Everything and John Weiley’s Imax feature Solarmax. Lois’s professional experience includes Executive Director at Australian Screen Directors’ Association (now ADG) and Manager of Metro Screen.

Born in New Zealand and based in Australia, Grayson Cooke is an interdisciplinary scholar and media artist, Associate Professor of Media in the School of Arts and Social Sciences at Southern Cross University. Grayson has presented media art and live audio-visual performance works in Australia and internationally, and he has exhibited and performed in major international festivals such as the Japan Media Arts Festival, the WRO Media Art Biennale, the Imagine Science Film Festival in New York, VIDEOFORMES in France and the Currents New Media festival in Santa Fe. As a scholar he has published widely in academic journals, and he is also an associate editor for the scholarly journal “Transformations.” He holds an interdisciplinary PhD from Concordia University in Montreal.