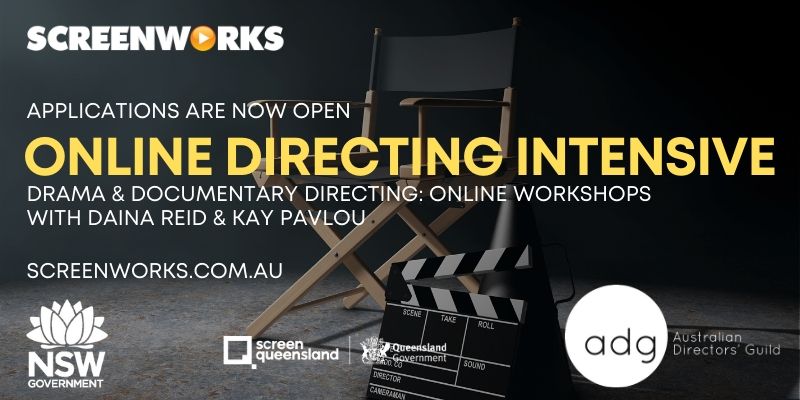 Applications are now open for screen directors living in regional Australia to apply to attend the online Directing Intensive which has been designed to further develop their screen directing skills and increase their career potential.

Guest presenters, Daina Reid (drama) and Kay Pavlou (documentaries) will each deliver a 3-hour workshop on directing as well as meet with individual participants online for 1/2 hour consultations advising on projects, skills development and careers.

Selected participants are welcome to attend both sessions or to choose one of the sessions. Individual consultations will be booked with the participants for 10, 11, 14 & 15th September.

Entry to Screenworks Directing Intensive is by application. Deadline for application is 9am Monday 17th August 2020

There are limited places available.

All applicants selected from regional NSW and Queensland will have their course fees subsidised by the state agencies.

The fee for any applicants selected from the Northern Territory, Western Australia, South Australia, Tasmania, Victoria and the Australian Capital Territory is $110 including GST, which will be invoiced to the successful applicant and must be paid prior to the workshop.

If you need to apply for a fee waiver due to financial hardship, please email Ken Crouch, Screenworks Chief Executive Officer ceo@screenworks.com.au with your request.

To be eligible to apply for Screenworks Online Directing Intensive you must be living in regional Australia (as defined on Screenworks website) and have a demonstrated commitment to screen directing with one of the following:

A director may also be considered eligible if they have had recent success in projects currently in development that may meet one of the above criteria.

You must also be:

Applications will be assessed by Screenworks, the Australian Directors Guild and the relevant state funding bodies.

This workshop is most relevant to early-career regionally-based directors who have some experience in directing drama or documentary.

Deadline for applications is 9am Monday 17th August 2020

Daina Reid began her film career as a comedy writer and actor, before making the move behind the camera. Daina’s US episodic work includes The Handmaid’s Tale (Hulu) and David Makes Man (OWN/Warner Television) which was recently nominated for Best Drama Series at the 2019 Critics’ Choice Awards. Daina’s recent credits also include the upcoming thriller The Outsider (HBO) and the half hour comedy Upload (Amazon). In 2015, she directed Hunters, produced by Gale Anne Hurd (Syfy). Her UK credits include The Spanish Princess (Starz). Daina’s episode “Holly” of The Handmaid’s Tale, received an Emmy® and a Director’s Guild of America nomination.In Australia, Daina directed the series remake of the classic Australian film Romper Stomper, (Roadshow Rough Diamond/Stan) and Sunshine (Easy Tiger/Carver Films/SBS). Sunshine, a 4-part miniseries set in Melbourne’s South Sudanese community, won the 2017 AACTA award for Best Telefeature or Miniseries, and Daina won the Australian Directors Guild Award for Best Direction of a TV Miniseries. Her other Australian credits include The Wrong Girl, as well as the final seasons of The Dr Blake Mysteries and Offspring. She directed and co-produced the mini-series adaptation of The Secret River by Kate Grenville, which premiered at the Sydney Film Festival, and screened at the FIPA (Festival International De Programmes Audiovisuels) in Biarritz, France.Daina is a frequent collaborator of award-winning producer John Edwards, their projects include Paper Giants: The Birth of Cleo and Howzat! Kerry Packer’s War, both of which received AACTA award nominations for Best Direction. Following the success of The Birth of Cleo, Daina directed the follow-up Paper Giants: Magazine Wars. In 2013, she directed Nowhere Boys which won the Best Children’s Television Series AACTA Award. Daina’s other television credits include: Never Tear Us Apart; The Untold Story of INXS; Ready for This; Miss Fisher’s Murder Mysteries; Rush and City Homicide to name a few. Her first feature film, I Love You Too, about a commitment-phobe and a New Ager who buddy up to win the women of their dreams starring Yvonne Strahovski and Peter Dinklage.

In 2017, Daina received the Michael Carson Award at the Australian Directors’ Guild Awards, in recognition of her excellent contribution to TV Drama Directing.

She currently has a feature in development with Carver Films as wells as a couple of Television projects.

Kay Pavlou is a multi-award-winning director and writer of drama and documentary for both television and cinema.

In documentary, as company director of Dream TV, Kay was co-producer, writer and series director for the 6 part documentary series Race to London. She’s written and directed several episodes of the documentary series Who Do You Think You Are? – including Adam Goodes and Toni Collette – as well Recognition: Yes or No?, Family Footsteps 2, Desperately Seeking Sheila, Gangs of Oz, China – Monumental Vision, Under One Roof, Pirate Patrol and her very personal series Cyprus – A People Divided.