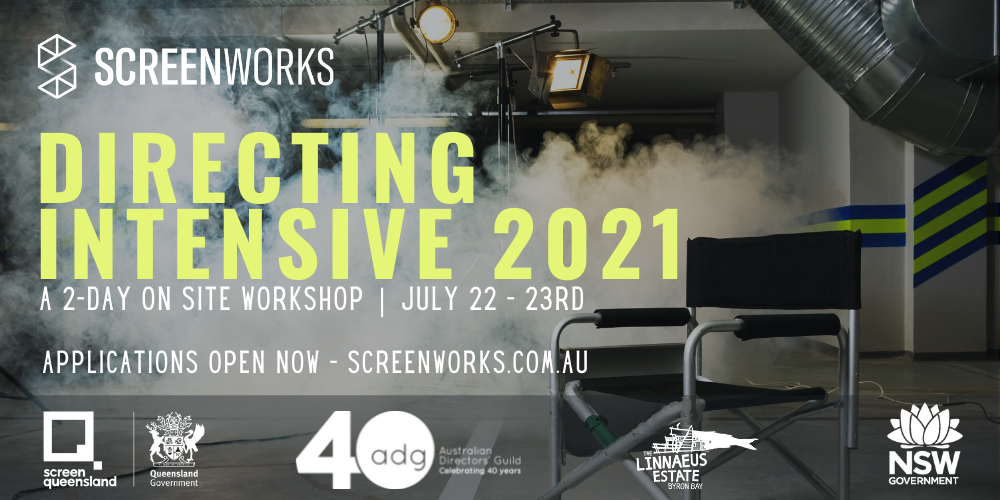 Screenworks, in partnership with the Australian Directors Guild and Linnaeus Estate Education Fund, is offering regionally based screen directors an opportunity to connect with and learn from two of Australia’s most accomplished screen directors in a two-day intensive on the craft of screen directing.

Rowan Woods and Jen Peedom, two of Australia’s most renowned and critically acclaimed screen directors, will be guest tutors at Screenworks’ Directing Intensive in Byron Bay on 22nd and 23rd July 2020. The two directors will advise selected early career regional screen directors on technique, skills and project development for drama and documentary film and television.

Entry to the Screenworks Directing Intensive is by application and is open only to current Screenworks Members.  Participants will be selected by a panel including representatives from the ADG, Screenworks and each of the participating state and territory funding bodies.

This is a rare opportunity to connect with and receive advice from prominent Australian screen directors and the Australian Directors Guild.

The cost to selected applicants from regional NSW is $220 inc. GST* which includes tuition and catering. Some travel support grants may be available to selected participants living outside the Northern Rivers region.

*Selected applicants from regional Queensland will have their participant fee and travel costs covered by Screen Queensland.

Jen Peedom is a BAFTA nominated director, known for her gripping, intimate portraits of people in extreme circumstances. Her credits include the internationally renowned feature documentaries SOLO, SHERPA and most recently MOUNTAIN, a collaboration with the Australian Chamber Orchestra.

Her most recent film, MOUNTAIN completed a sell-out national concert tour with the Australian Chamber Orchestra and screened internationally at San Sebastian, London and Busan International Film Festivals. Following the Australian release, it overtook Sherpa to become the highest grossing Australian documentary in box office history ($2million), and an impressive 11-week run in UK cinemas. It is now releasing theatrically internationally, including the US in May.

In 2010, Jen was the inaugural recipient of the David & Joan Williams Documentary Fellowship which recognizes and rewards creative ambition, intellectual rigour and innovation in documentary cinema.

She runs Stranger Than Fiction Films, a boutique production company based in Sydney, Australia. Rowan Woods is a director of TV and feature films and Head of Directing at AFTRS – Australian Film Television and Radio School. He is a board member of the ADG – Australian Directors Guild.

Rowan Woods’ reputation as drama director is complemented by directing international VFX / action series including FARSCAPE, SPARTACUS and HUNTERS for Exec producer, Gayle Anne Hurd. He was also the set-up director for the 5th and final season of RAKE and recently won a 2018 BAFTA Award for the opening episode of NOWHERE BOYS, executive produced by AFTRS alumni Tony Ayers for ABC TV. The Screenworks 2021 Writing Intensive is supported by the NSW Government through Screen NSW.

Two regional Queensland participants will be supported by Screen Queensland.

The Screenworks 2021 Writing Intensive is proudly supported by the Linnaeus Estate Education Fund.